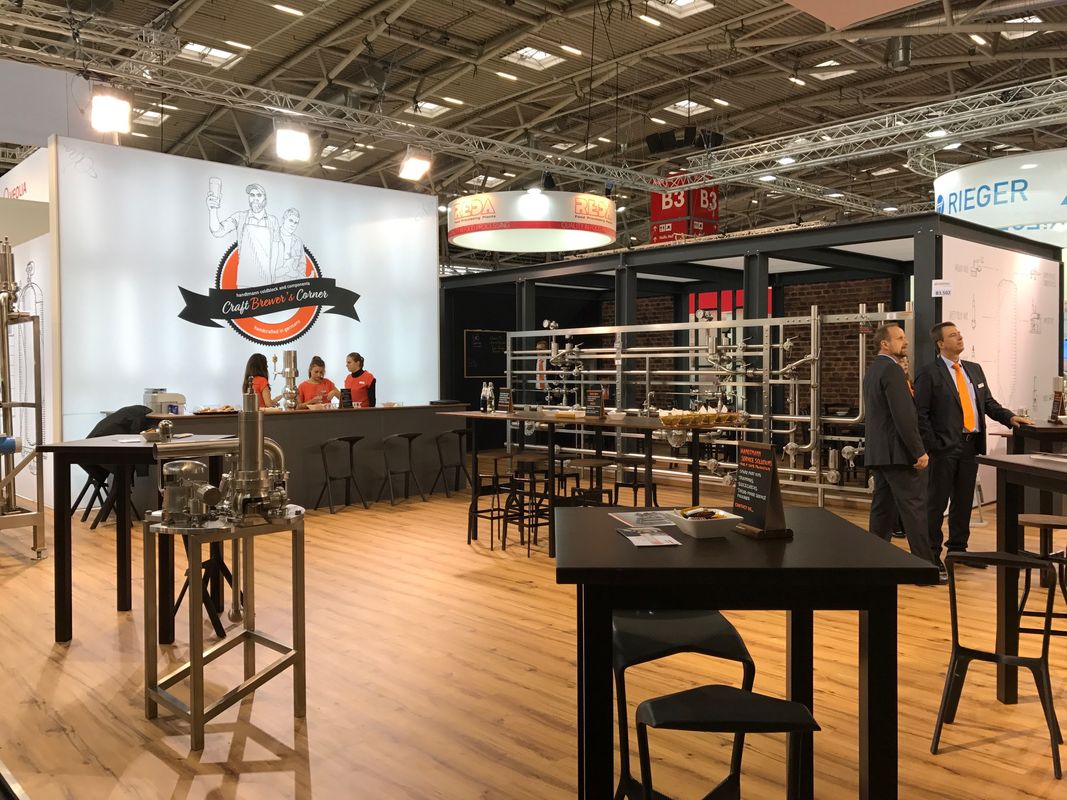 The Handtmann Armaturenfabrik reflect on a very positive balance from the new exhibition concept.

After four years it was finally time again. The World Trade Fair for the beverage and liquid food    industries took place on the Munich fairgrounds from Sept. 11 – 15, 2017. With over 76.000 visitors from more than 170 countries the drinktec 2017 has achieved the best result in its 66 years history, and thus exceeded all expectations. As the number of visitors rose by roughly 10.000, the drinktec 2017 records a significant surplus of 12%. Also a new record: 1.749 exhibitors from 80 countries fascinated the visitors in 15 halls.

Inspired through the Craft Brewer Scene, this year’s booth was built in the style of a cozy and convivial pub named “The Craft Brewer’s Corner”. The furniture, the color style and the decoration had been chosen in line with the theme. With this innovative concept the Armaturenfabrik created an exciting and memorable experience for the numerous visitors.

Various exhibits and components on the booth also reached a high level of attention.  Among others, a complete pipe fence element, different versions of tank top plates, a double-seat valve block and a CSS plant were shown.

Since the middle of 2017, a new adsorber material 2.0 for the CSS plant is available. There are several advantages, e.g., a significantly improved reduction of tannins, no more use of CO2 and salt during regeneration, as well as shorter regeneration times. Many visitors indicated their strong interest in this topic.

In addition, the “Hop to the Top” vessel was presented on a trade show for the first time. It achieved considerable attention and attracted lots of visitors to the Handtmann’s exhibition stand. By means of “Hop to the Top”, and combined with the Handtmann injector system, a gentle and continuous transport of hop pellets into the fermentation tank is guaranteed.

The Armaturenfabrik was very pleased with the great interest during the fair. There were lots of interesting and valuable conversations, and a very positive balance can be drawn from this 5 days exhibition. The next drinktec will take place in 2021. Until then, the Armaturenfabrik will participate in several exhibitions, like the Beviale Moscow, the CBC Nashville, the Craft Beer China, and the Achema in Frankfurt.