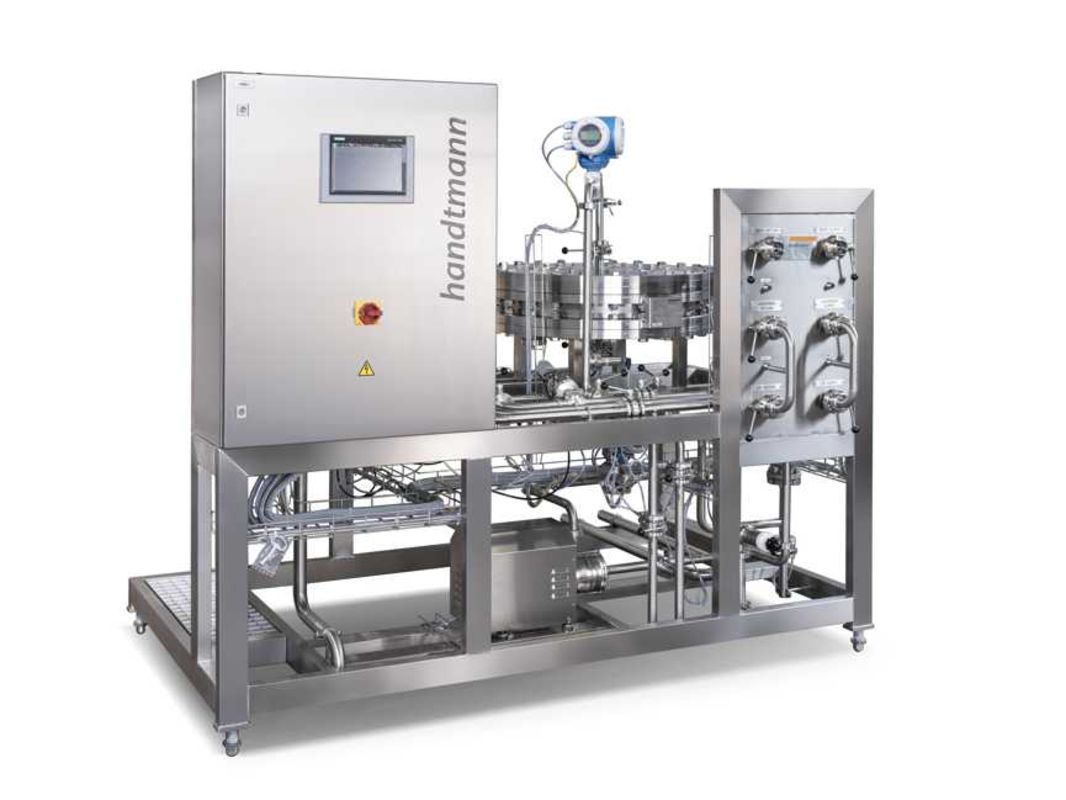 The new Handtmann CSS 020 plant represents an innovative beer stabilization technique for small breweries. It can be integrated into any filter line.

With the introduction of the CSS 020, the Albert Handtmann Armaturenfabrik extends its innovative beer stabilization technique to capacities between 20 to 30 hl/h as well.

As of now, small breweries and craft breweries can also stabilize beer without having to use polyvinylpolypyrrolidone (PVPP). This has been made possible by the CSS 020 (CSS stands for Controlled Stabilization System), developed by the Albert Handtmann Armaturenfabrik GmbH & Co. KG and based on its CSS beer stabilization system but with a quantity rating between 20 and 30 hl/h. The new CSS 020 provides the same benefit as its 'elder brother' for large breweries: low-impact and extremely effective beer stabilization. A stabilization agent based on naturally occurring ingredients is used instead of polyvinylpolypyrrolidone (PVPP). This excludes residual matter from the beer. The Princen Brouwerijen BV in Amsterdam, the Netherlands, is already relying on Handtmann's innovation. The first CSS 020 was installed and commissioned there at the end of July.

"Craft beer has become increasingly popular over the years, so it was a logical step for us to find ways of making our innovative and reliable CSS beer stabilization technique available to small breweries as well. It's great that we have succeeded and can now serve this segment with our new plant. The new CSS 020 represents the optimal extension of our plant range," explains Michael Feische, Sales Manager for Components and Filtration at Albert Handtmann Armaturenfabrik GmbH & Co. KG.

With a capacity range from 20 to 30 hl/h (whereby smaller amounts are also possible, of course), the CSS 020 ensures effective and natural beer stabilization for small breweries and craft breweries. Handtmann's beer stabilization technique is based on the targeted adsorption of polyphenols involving a natural stabilization agent: the polysaccharide agarose. This is modified by means of a patented technology and is then implemented in the adsorber modules that represent the core component of the CSS plant. Substances that contribute to turbidity accumulate on the agarose, only detaching when the module is regenerated. This enables the substances to be separated from the beer.

The stabilization agent (adsorption material) remains usable in the plant for several years and can be regenerated there without loss of efficacy. This makes Handtmann's new plant especially sustainable. The material is compliant with the German beer purity law and has been approved by the US-American FDA (Food and Drug Administration). Handtmann's system requires no dosage facilities and can be integrated into any filtration line. It is available in manual and semiautomatic versions.

The development of the CSS 020 was prompted by a query from the Princen Brouwerijen BV. At its Amsterdam site the young brewing company (operating since 2014) produces 15,000 hl of beer per year, and it has specialized in brewing lager beer. The brewing experts wanted to avail themselves of Handtmann's CSS beer stabilization technology in order to give the beer a longer storage life. "Princen knew that our system is effective. However, the conventional CSS beer stabilization plant is designed for larger quantities of beer. So we began to experiment with a view to being able to make our system available to smaller breweries with less capacity – and the result was the CSS 020," recalls Christopher Dethlefs, Project Manager in the Filtration and Separation department at the Albert Handtmann Armaturenfabrik.

The first CSS 020 was installed and commissioned at the Amsterdam site of the Princen Brouwerijen BV at the beginning of July. It has a flow rating of 20 hl/h with a current stability curve of 200 hl, and it is installed upstream of a pasteurization plant followed by a keg filling plant. The plant is operated manually in the main, apart from a touch panel for controlling it and selecting individual recipes and Parameters.