Hard Seltzer: The light and easy alternative to beer 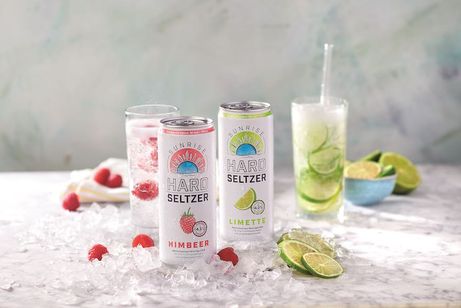 What is hard seltzer? Hard seltzer by definition consists of fizzy water, alcohol and sometimes - not always - added fruit flavour. However, water is not simply mixed with spirits, but (most) hard seltzer is a fermented, brewed product.

Hard seltzer has its origins in the USA, where alcohol based on sugar cane or malt is mostly used, whereas outside the United States, fermented and neutral alcohol is often used. The alcohol content is around 5% by volume on average, which makes it a fairly light drink.

With about 100 calories per can and about 2 grammes of carbohydrates per serving, it is indeed a low-carb drink and a generally glutenfree drinking experience. But to call it healthy would be farfetched. Hard seltzer contains hardly any nutrients and can contain ingredients such as cane sugar and corn syrup in addition to citric acid and sodium citrate.

Unlike conventional alcoholic mixed drinks, hard seltzer is produced in a brewing process. Alcohol is obtained from water and malt or cane sugar using yeast. Only afterwards are fruit flavours added. However, some breweries have remarked that production can be quite difficult  there is no high hop character, no high alcohol content and no fullbodied malt to hide behind. On the other hand, the shorter processing time during brewing is an advantage; they are fermented and ready for sale within a week. Moreover, fewer and cheaper ingredients are needed.

Hard seltzer and the market potential in Germany

A Berlin start-up company brought the first hard seltzer to Germany in spring 2020 under the name “Holy Hard Seltzer”. In September 2020, it was then announced that Lidl would be the first discounter to launch the trendy drink from the USA on the German market.

Big players like Berentzen or Bacardi Germany are currently still holding back. One assumption is that the alcopop tax is one of the biggest hurdles. Indeed, it is not clear whether the alcopop tax applies to hard seltzer or not. This depends on the production process. In general, you cannot say that hard seltzer is not an alcopop. In the USA, hard seltzer was last year‘s great success story. Sales rose by 200 percent within 12 months and experts predicted equally impressive growth for the next three years. So it will be interesting to see which players will appear on the German market and how this new category of drinks will establish itself in Germany. Another open question is: From which corner will the competition come? Is it the distillers who say “This is our segment!”? Or is it the brewers who say “It is brewed!”?

Since this is basically a brewing process and Handtmann Armaturenfabrik has some customers based in the USA, our sales department is currently in very close contact with US breweries to at best support them in the process with our products. The sector holds great potential for us and our products.