Arthur Handtmann: A figurehead with a good heart

(An article from the Schwaebische Zeitung newspaper for the Biberach region, by editor Daniel Häfele.) 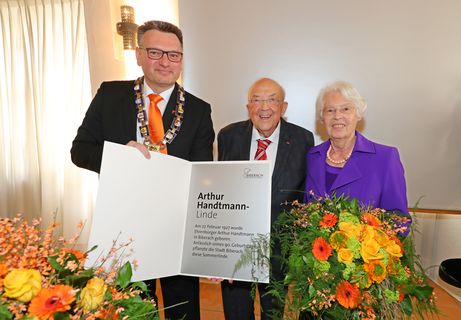 Biberach/sz He turned a small metal foundry with 18 workers – who produced waffle makers and Spaetzle noodle presses from bits of crashed aeroplanes – into a global business with a workforce of 3,600: Arthur Handtmann. On Monday, this home-grown hero and sole bearer of all the town's honorary titles celebrated his 90th birthday. Joining his family at the Town Hall for a musical performance were many figures from the world of politics, economics and the church. The music was provided by the Kleine Schützenmusik, the Youth wind orchestra of the City of Biberach.

In 1945, a young Arthur Handtmann returned to Biberach from an American POW camp. “I will never forget the day when my father asked me whether I would have the confidence to take over the business as soon as possible”, said Arthur Handtmann during his speech at the Town Hall. Over the next three years, it was a baptism of fire. He had to pick up everything he needed to know about managing an engineering company as quickly as possible. In 1948, he attended the only engineering college, in Constance in the French Zone. A student from Monday to Friday, and a junior partner at the weekend – in 1950 he became a qualified engineer and Managing Director of Handtmann.

Over the coming decades, this holder of the Order of Merit of the Federal Republic of Germany, First Class, built the little Biberach company up into an international enterprise. Inflation, currency reforms, economic recessions – Biberach's honorary citizen didn't give up in the face of problems. “You owe your success above all to your good business sense, your openness to innovation and your willingness to take risks, coupled with tremendous stamina,” declared Biberach's Lord Mayor Norbert Zeidler in his tribute speech. Today, the company has 3,600 employees worldwide and generated sales of 835 million euros in 2016. The Handtmann Group of Companies leads the global market of filling and portioning machines. What's more, it is Germany's largest family-owned aluminium casting foundry. This year, 60,000 metric tonnes of cast parts were produced, mostly for the automotive industry. Since 1998, his son Thomas has managed the company. But Arthur Handtmann can still be found on the premises every day, his health permitting.

His daily tour of the facilities is just one sign of how important his employees are to him, now as ever. “You once said 'For me, people come first!'” said Lord Mayor Zeidler. So perhaps it was no great surprise at the matinee that Arthur Handtmann used the occasion of his 90th to give his employees a gift as well: he and his wife founded the “Arthur and Ilse Handtmann Employees' Foundation”. Without a great deal of bureaucracy, employees and their relatives who find themselves in particular hardship can obtain financial support from the employees’ foundation in the future.

Called up to serve in the airforce in Danzig at 17

Donations from Arthur Handtmann have helped to build the Haus Maria hospice, the Wieland grammar school and the Kleine Schützenmusik, among other things. This commitment probably stems from his experiences during the Second World War. At 17 he was called up to Danzig to serve in the German airforce, and at 18 he found himself in an American POW camp: “This is when I bade farewell to my youth and adopted the attitude that still serves as my guiding principle today.”

People packed into the tiniest space, no food, no medical assistance, “the weak had no one to speak on their behalf, and were bullied mercilessly,” explains Handtmann, who is also an honorary member of the local marksmen's festival committee. He organised the distribution of food among his company of ten and, thanks to his knowledge of English, obtained additional food from the rubbish bins. He says: “I then brought this back to the camp and gave it to those in direst need.” And he has retained this feeling of responsibility for others ever since. His home town of Biberach also helped him make it through those dark times. “400 kilometres away from home, I heard that Biberach still existed. From then on, I had only one goal: get out of the camp, home to my parents.” On returning there after a great deal of struggle, he had a feeling of happiness that he since put to use for the benefit of Biberach.

Married to wife Ilse for 65 years

His wife Ilse has been at his side for most of his life. “Through 70 years of vast change, in my wife Ilse I have had the very best companion,” says Arthur Handtmann. She freely discussed all private and financial problems with him, and helped to find solutions. He thanked her for her clear, sensitive and intelligent advice. This September, the couple will celebrate their Blue Sapphire wedding anniversary – 65 years of marriage. They had three children, Thomas, Elisabeth and Ursula. The latter died in 2011. The couple now have 17 grandchildren and one great grandchild. “We both want the future of the Handtmann companies to be secure,” says the patriarch. And that is why they have written out a family charter, to be adhered to by family members. At an annual Family Day, everyone is kept informed of the group of companies further development. This year, the fifth generation entered the company: grandchildren Markus Handtmann, Stefanie Strudel and Valentin Ulrich.

The gift of a large leaved linden tree

What can you give an Arthur Handtmann for his 90th birthday? The Town Council thought up something very special: the birthday boy received a large leaved linden tree. As soon as the weather is better, employees will plant the Arthur Handtmann linden tree in a nice spot on the Gigelberg hill. The heart-shaped leaves symbolise Handtmann's love for his fellow men, said Zeidler. Moreover, the linden tree is a plant that grows anew year by year and is always changing: “This linden tree has a lot in common with you.”