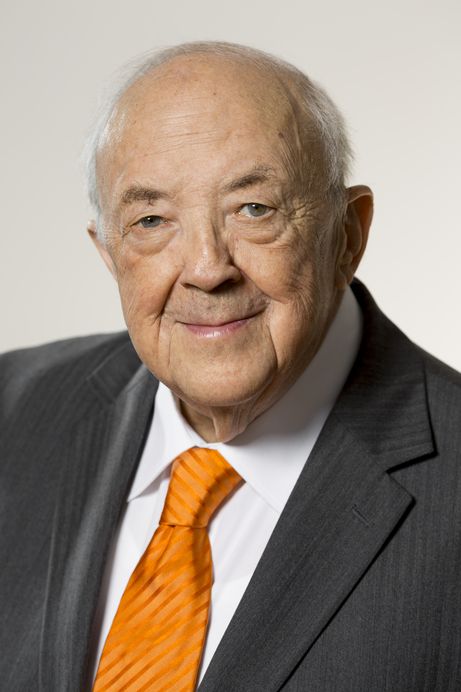 Biberach, 16.04.2018 – Arthur Handtmann, President of the Advisory Board of the Handtmann Group of Companies, passed away at the age of 91 on 14th April, 2018, surrounded by his family.

Open to new ideas, inquisitive and extremely approachable – this is how many of those acquainted with Arthur Handtmann describe his personality. Accepting social responsibility in his role as a businessman was not only a matter of course for him, it was also the key to the economic success of his company. For Arthur Handtmann, benevolence always went hand in hand with determination and straightness. With a Swabian father and an English mother, he was both closely rooted in his home region and cosmopolitan. Arthur Handtmann was extremely highly respected by local and non-native employees, by business partners in Germany and abroad, and by numerous people who came into contact with him. With his death, the Handtmann family and the Handtmann Group of Companies have lost their leading figure, the towns of Biberach and Annaberg-Buchholz have lost their honorary citizen and the region of Upper Swabia has lost one of the last great entrepreneurs of the post-war era.

Arthur Handtmann was born in Biberach in 1927. After being called up to the military and time spent as a prisoner of war, he joined his parents’ company in 1947. He was the third generation of his family to work at Handtmann and the mechanical engineer transformed it from a small brass foundry to an international group of companies. His judgement, his intuition and his foresight were decisive factors. During his time as Managing Director from 1950 to 1998, the workforce increased from 56 to 1,500 employees. Sales rose from DM 350,000 to DM 250 million. Building was his passion. Under his leadership, new plants and buildings were constructed – first on Birkenallee in Biberach, which was later renamed Arthur-Handtmann-Strasse, then in Annaberg, Saxony, and in Biberach-Aspach. Arthur Handtmann’s approach to business areas was based on diversity. Today, the Handtmann Group of Companies comprises the Light metal casting, Systems engineering, Filling and portioning systems, Process technology and Plastics engineering divisions. In 1998, Arthur Handtmann handed over the management of the Group of Companies to his son Thomas. Even after this, Arthur Handtmann stayed on as the President of the Advisory Board of the Handtmann Group of Companies and saw the further expansion of his life’s work: in 2018, Handtmann is now the market leader in a number of sectors, has 3,600 employees worldwide at 13 locations and recorded sales of € 880 million in the previous fiscal year.

Arthur Handtmann has been recognised on numerous occasions for his dedication to social projects and to business. For example, he was named an honorary citizen of Biberach an der Riß and Annaberg-Buchholz, where the Group of Companies runs large production sites. For his outstanding services to business and for the public welfare, he was awarded the Order of Merit of the Federal Republic of Germany – 1st class in 2015.

The funeral service for Arthur Handtmann will be held in the Friedenskirche in Biberach an der Riß on 27th April, 2018 at 1 p.m. Most of the seats will be reserved for invited guests. The funeral will be broadcast for employees and retired employees of the Handtmann Group of Companies in suitable spaces at the company plants.