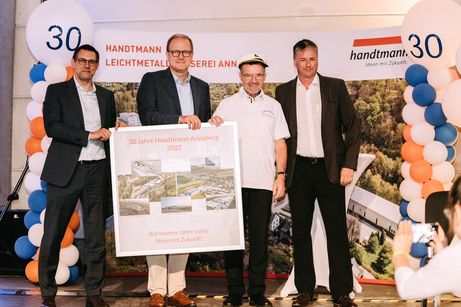 The Handtmann light metal foundry in Annaberg celebrated its 30th anniversary on 2 July 2022. It became part of the Handtmann Group 30 years ago and has continued to develop ever since. The Annaberg light metal foundry blends into the Sehmatal along the Sehma River and now provides jobs for around 400 people. A development in which the Handtmann family of entrepreneurs and all employees actively participate, which they have helped to shape and of which they can be justifiably proud together.

This ceremony was celebrated with an "open day" and an evening event. The light metal foundry opened its doors from 10 a.m. to 4 p.m. and offered a colourful programme for young and old, including guided tours of the company. Many visitors from Annaberg-Buchholz, the Chemnitz area and the entire Erzgebirge region accepted the invitation.

An official reception with invited guests followed at 6 pm. Speakers from politics, business and the Handtmann Group praised the development at the Annaberg site and the professional and intensive cooperation with the other Handtmann sites. A big thank you went to the Annaberg workforce for their dedicated contribution.

This flowed seamlessly into an evening event with a high-quality cultural and musical programme. In a cheerful and relaxed atmosphere, all employees together with the management from Annaberg and Biberach were able to round off the day.

The 30th anniversary of Handtmann Leichtmetallgießerei Annaberg is an occasion to look back once again.

On 18 June 1992 Arthur Handtmann took over the foundry founded in Annaberg-Buchholz in 1926 from the Treuhandanstalt. The order situation at the plant was extremely poor at that time. Nevertheless, the demands of the Treuhandanstalt - a takeover guarantee for 100 employees and an investment volume of 10 million Deutschmarks within 5 years - were far exceeded. The former foundry was renamed the current "Handtmann Leichtmetallgießerei Annaberg GmbH".

The years from 1992 to 1995 did not go as desired. It was not until 1996 that the economic development took a better course. Many orders could now be generated for the Annaberg production site. Many customers, who are still very important today, were acquired during this period. In spring 1997, the gravity die casting era ended for Handtmann Leichtmetallgießerei Annaberg and our own toolmaking operations were also discontinued at the site in the same year.

During the years at Handtmann, intensive work was always done on automation and the four-shift system was introduced to better utilise the state-of-the-art facilities. The initially small foundry grew steadily. The machinery was continuously modernised and upgraded.

From 2009 onwards, liquid metal was supplied. In the same year, the general economic crisis also reached the Annaberg-Buchholz production site: Handtmann had to record a sharp decline in orders and apply for short-time work. But even during this difficult time, investments were made in technology and production continued to be modernised.

In June 2018, Handtmann Leichtmetallgießerei was once again named the best training company in Saxony. In the same month, the first sample casting of a cross-member for Volkswagen was made. This marked the plant's successful entry into electromobility. Construction of a new foundry hall and a new technical and social building began in spring 2019.

Handtmann Leichtmetallgießerei Annaberg GmbH now has three decades of ups and downs behind it. Despite one crisis or another, the plant experienced steady growth during this time. This was only possible thanks to the good commitment of all employees - from machine operators to management.

About the Handtmann Group

The Handtmann Group, headquartered in Biberach, Germany, was founded in 1873 by Christoph Albert Handtmann in Biberach/Riß and is now a family-owned company with worldwide operations. Through its activities in six business areas, Handtmann holds leading positions in markets worldwide with innovative strength and a focus on technology. The divisions include: Light Metal Castings, Systems Engineering, Filling and Portioning Systems, Plant Engineering, Process Technology and e-solutions. With around 4,100 employees, a turnover of 965 million euros was achieved in 2021.