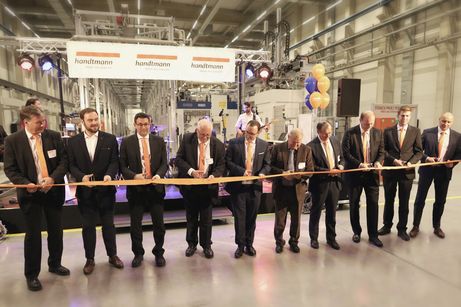 With the new production plant in Kechnec, Slovakia, Handtmann has built one of the most modern foundries with mechanical machining in Europe to date. The “Green Foundry” project sets new standards in terms of sustainability. This production site was now officially inaugurated with an official ceremony and invited guests. During the opening ceremony, speakers from politics, business and the Handtmann Group of Companies paid tribute to all those involved in the project and especially to the professional and intensive cooperation of the entire team from Germany and Slovakia.

The groundbreaking ceremony for the new and expandable factory was held on 23rd August 2019. Two years after the start of construction, a stately complex of buildings and halls with the associated outdoor facilities has been erected on the approximately eleven-hectare site adjacent to the motorway to Košice. In the first development stage, a 210 metres long and 80 metres wide hall with a floorspace of 17,000 square metres, divided into three hall sections was built. The casting hall accommodates six die-casting machines with a closing force of 3,200 tonnes each, which can produce large and complex clutch and transmission housings for hybrid vehicles. The second hall section is intended for logistics and support areas such as quality inspection, maintenance, media and energy supply. Machines for the mechanical machining of the cast parts were installed in the third hall section. A great deal of experience internal and external specialists has gone into for the design of the modular floor plan. Alongside this complex, Handtmann has built an office and amenities building that houses the canteen, social rooms and changing rooms. In the first development stage, approximately 160 people will be working at the Kechnec site.

“The Light Metal Casting division has geared up for future requirements by increasing its production capacities,” says company director Thomas Handtmann. High-pressure die cast parts are becoming ever more complex, the demands on their performance ever greater and the requirements for more sustainable production processes ever higher. “At the Kechnec production site, the die casting technologists and plant planners have succeeded brilliantly in meeting the challenge of balancing economic success, ecological compatibility and social responsibility. The state-of-the-art plant technology used ensures greater efficiency, shorter process times and higher productivity in the production of castings,” praises Thomas Handtmann.

The new construction was made necessary, amongst other things, by a major contract from an international automotive supplier. As requested by the customers, the new plant is now located in the immediate vicinity of their production facility. The interaction of the division’s production sites was a decisive criterion for the awarding of the contract in the first place. Contracts of this dimension can only be handled effectively through the symbiosis of the Biberach and Kechnec sites and the associated specifications according to machine classes. The new site has increased the possibilities and scope for action to provide the required processes within the value chain in collaboration with the end customers’ assembly plants and the customers’ production sites. This international integration helps Handtmann to meet future requirements and pursue its successful path. “The entire project was carried by the very good cooperation of all trades and authorities involved as well as our colleagues in Košice and Biberach, which was no matter of course in times of the coronavirus crisis in 2020 and put us all to a very big test,” explains Wolfgang Schmidt, Chief Executive Officer of the Handtmann Light Metal Casting division. In the end, we all succeeded together, thereby paving the way for us to become a significant and attractive employer here in Slovakia.”

Environmental considerations were always a focus of the new construction project. With the Kechnec plant, Handtmann has built one of the most modern foundries with mechanical machining in Europe to date and sets new standards in terms of sustainability. In recognition of this, the Handtmann Group of Companies received the “Sustainability Award in Automotive”, jointly awarded by the ATZ/MTZ Group and Roland Berger. With its “Green Foundry Kechnec – Handtmann sets new standards” project, Handtmann was announced the winner in the “Operations” category out of a total of 50 entrants from the automotive industry.