Planning is a dream! 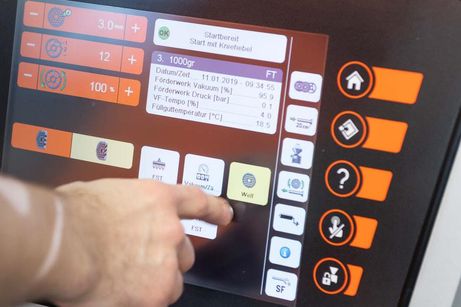 Less is more – this summarises what motivated Südbayerische Fleischwaren GmbH (SBF) to choose the Handtmann Communication Unit (HCU). As overfill in production has been reduced by approximately 60 percent since the introduction of the software-supported production networking. The production planning work has also decreased significantly. Furthermore, it was possible to considerably increase the effective hourly output. At their plant in Obertraubling, SBF primarily produces cooked and dry sausage in sheep’s and hog casing based on the slogan of “Gutes von daheim” [Good local produce]. Only Handtmann fillers are used. Four lines work with the AL PVLH 228 sausage filling and hanging line, one line with the AL PVLS 125 sausage filling and cutting line and one line is designed for clipping sausage products. In this interview, we ask the BF Plant Manager Walter Stemplinger and Production Manager Bastian Speckner about their experience with the HCU.

Why did you start using the HCU in your filling department?

Bastian Speckner: The main reason was the weight control as we wanted to reduce give-away. Before its introduction, the products were sometimes too light and sometimes too heavy. To be on the safe side, the weights were often set too high and too much material was given away. This has now been reduced by approximately 60 percent.

How have the working methods changed since the HCU was introduced?

Bastian Speckner: Planning is much more simple and much faster. Information on the allergens, types of animals, whether curing salt is used or not etc. is stored per article. The system thus automatically schedules interim cleaning when it is needed. The work for the operators has become much easier. After planning, the articles to be produced are transferred to the filling machine and the relevant programmes can be loaded with just a few clicks – on average, we plan 30 articles per day. Also, parameters have been blocked or restricted for the operators. There are therefore fewer setting options and certain setpoints can only be changed very slightly. Now, the same production outcome is achieved on all production lines. The product quality has therefore improved even more.

Walter Stemplinger: Since the introduction of the HCU, planning is a dream! The staff can now work order by order and they know exactly when the equipment has to be cleaned. Previously, we often had the problem that half of the lines had already finished production while the filling process of the other half was still underway. Now, this is simply shared between them using the planning software

The HCU is a tool for production optimisation. Is this having an effect?

The HCU is a tool for production optimisation. Is this having an effect?
Bastian Speckner: The portioning speed is now restricted. Previously, everyone tried to produce as quickly as possible, but it makes more sense to produce more slowly and more uniformly. This caused a real outcry at the beginning. Now the operators also understand that this is the better way to work. The HCU demonstrated that by operating in this way we were able to achieve an increase in effective capacity of up to 20 percent. With the introduction of the new system, we defined numerous down-time reasons that have to be entered by the operator after a down-time of five minutes. In addition to “fault” and “break”, these included “no sausage meat” and “no smoking trolley”. But once we had identified and ruled out these shortcomings with the help of the HCU, the only options left were “fault” and “break”.

Walter Stemplinger: Based on facts or data from the HCU, initiating new things and changing processes is now significantly easier. Before the HCU, the operator on the linking line also collected the sausage meat. Now, a member of staff takes care of the sausage meat for all the machines. Staff from the smokehouse fetch the loaded smoking trolleys.

Have you defined automatic rules in the HCU?

Bastian Speckner: Yes, we have defined all the cleaning rules based on allergens, types of animals and additives. Cleaning is automatically specified in the production plan. If interim cleaning is required in the production sequence the staff select the “cleaning program”. The fact that cleaning has taken place is clearly recorded and this information is also used for the documentation.

Walter Stemplinger: Before the HCU, we had two scales in the filling department. The operators were instructed to weigh products regularly. But this was not always complied with. Now, there is a weighing system connected to each of our lines. We have defined rules which stipulate that the operators must weigh again after x portions. After the introduction of the HCU, the machine often stopped and only then did the operators weigh the product. They have now got the hang of things and they weigh during the filling process without the machine coming to a standstill. Weighing is an integral part of the production process.

What was your experience of the installation of the HCU?

Walter Stemplinger: A major challenge was fitting the scales as our ceilings are relatively high. We had to lay network cables but that did not cause us any problems. The introduction worked very well and production was not affected. We did not carry out any trial runs. Another Südbayrische Fleischwaren plant was already using the HCU and we were confident that we would also benefit from its advantages. And that proved to be true.

And how happy are you with the support from Handtmann?

Bastian Speckner: Our software is updated but it would be better if it happened more often. Otherwise the support is great. We have a direct contact, which is worth its weight in gold. We either get through to him straight away or he rings us back. We get help every time we ring. If telephone support is not enough Handtmann accesses the HCU directly and provides support within the system itself.